A Lamma Island resident staged a dramatic protest against the felling of a tree in Sha Po New Village on Thursday, causing contractors to abandon the project as she refused to leave the scene.

The district councillor for the area has said the tree has to be chopped down owing to its poor health status and potential threats to safety.

Liz Gower, a long-term resident and environmentalist, said that she prevented the contractors from continuing their work: “I was walking to the ferry and saw them up the tree and starting yelling: ‘excuse me, what are you doing and where is your licence’?”

In video clips shot by the onlookers, Gower told the workmen that the tree was healthy and there was no fungus growth. She told HKFP: “I’m staying here until I see some proof from the government.”

he said eight more trees had been listed for the chop, but the contractors did not have a government stamp on the papers.

The Lands Department has yet to respond to HKFP for comment. 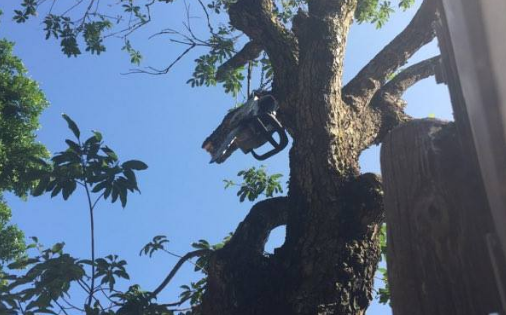 A chainsaw was abandoned in the tree’s branches. Photo: Kerys Haines.

“They have no licences to cut them, they only have a works contract,” Gower said. “It’s part of a new tree policy that I’m not aware of but these trees are not dying.”

“In the past, when they were going to fell trees, they had a policy of putting a notification on the tree,” she added, saying people would be able to understand the reason for the action. “You have one person who complains and says the tree is dangerous.. they’re frightened of litigation.”

“There is no concept of tree doctoring or tree husbandry.”

She said the district councillor for the area had it on her manifesto to cut down all “dangerous” trees, adding that she has called the police.

But Yu Lai-fan, who represents Lamma and Po Toi, said it was not the first time the tree was being examined, as multiple complaints had been received. She claimed the tree had been eaten hollow by worms upon examination. 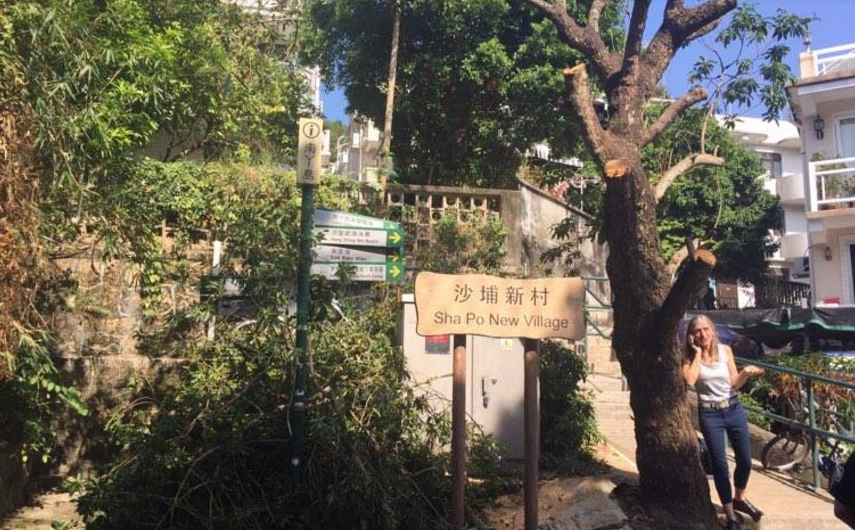 She told HKFP that although she suggested only pruning parts of the tree, the authorities decided to chop it down, and notices for the action were made public.

“We don’t know when it will fall, it cannot be helped… it has to be cut down,” she said. “It is on the main pedestrian road.”

She added that she was trying to reason with Gower and that police officers will talk to her.